As Machine Learning and AI rapidly grow within the IT industry and the car industry, financial or medical industry, VMware collaborated with NVIDIA to increase the productivity of vSphere and bring AI to the data center. So now we have the NVIDIA AI Enterprise suite as software certified on vSphere, enabling technologies  and software from NVIDIA for  rapid deployment, management, and scaling of AI workloads  in the modern hybrid cloud.

In this post, we will configure NVIDIA Ampere A100 GPU the new Multi-Instance GPU (MIG) software functionality. Multi-instance GPUs are a new feature in the vGPU drivers that further enhances the vGPU approach to sharing physical GPUs by providing more physical isolation of the share of the GPU’s compute power and memory assigned to one VM from others. On a vSphere 7 with NVIDIA A100 you can share a single GPU across 7 VMs, migrate MIG instances to other A100 hosts using vMotion and use DRS to balance MIG workloads for optimal performance, spread loads across available GPU, and avoid performance bottlenecks.

For using A100 PCIe 80GB GPU an NVIDIA Enterprise AI license is needed (it will be listed as NVAIE_Licensing-1.0 under your entitlements in NVIDIA licensing portal). It is not possible to use GRID vGPU with this GPU. It also only supports Linux OS and can only be used for computing (graphics not supported).

1. Login to NLP – Software Downloads (nvidia.com)  and choose the NVAIE in “Product Family”: 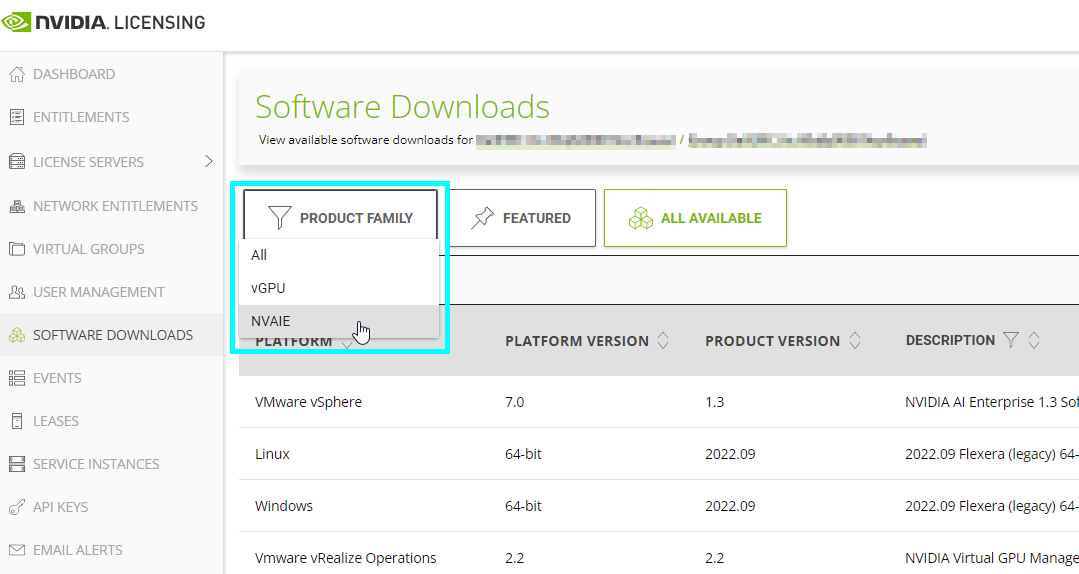 3. You can find ESXi driver within the ZIP:

Enable the “Global SR-IOV” feature at the vSphere host BIOS level through the server management console (in my case iDRAC). SR-IOV is a pre-requisite for running vGPUs on MIG. SR-IOV is not a pre-requisite for MIG in itself, SR-IOV and the vGPU driver are sort of wrappers around a GPU Instance. A GPU Instance is associated with an SR-IOV Virtual Function at VM/vGPU boot-up time. 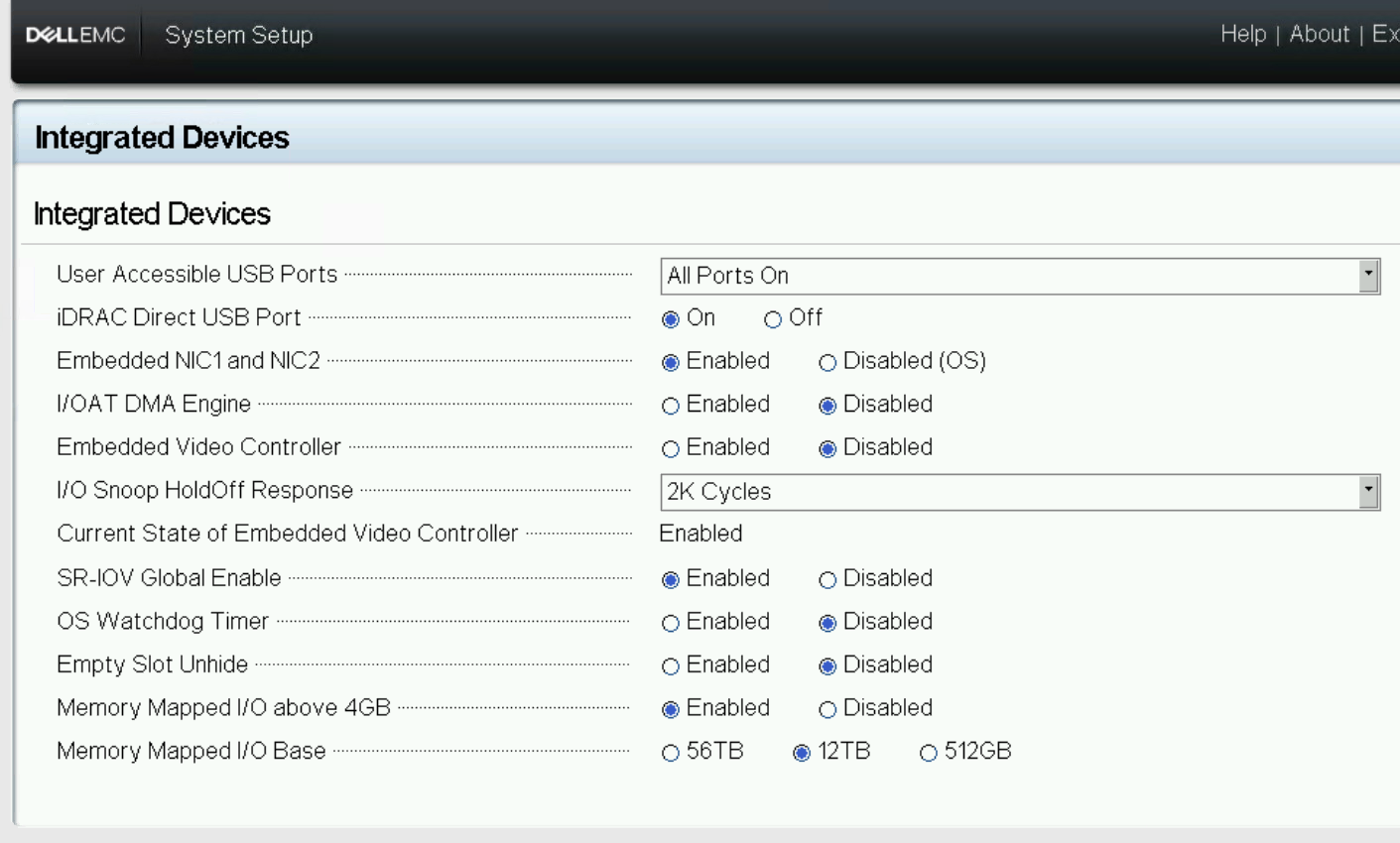 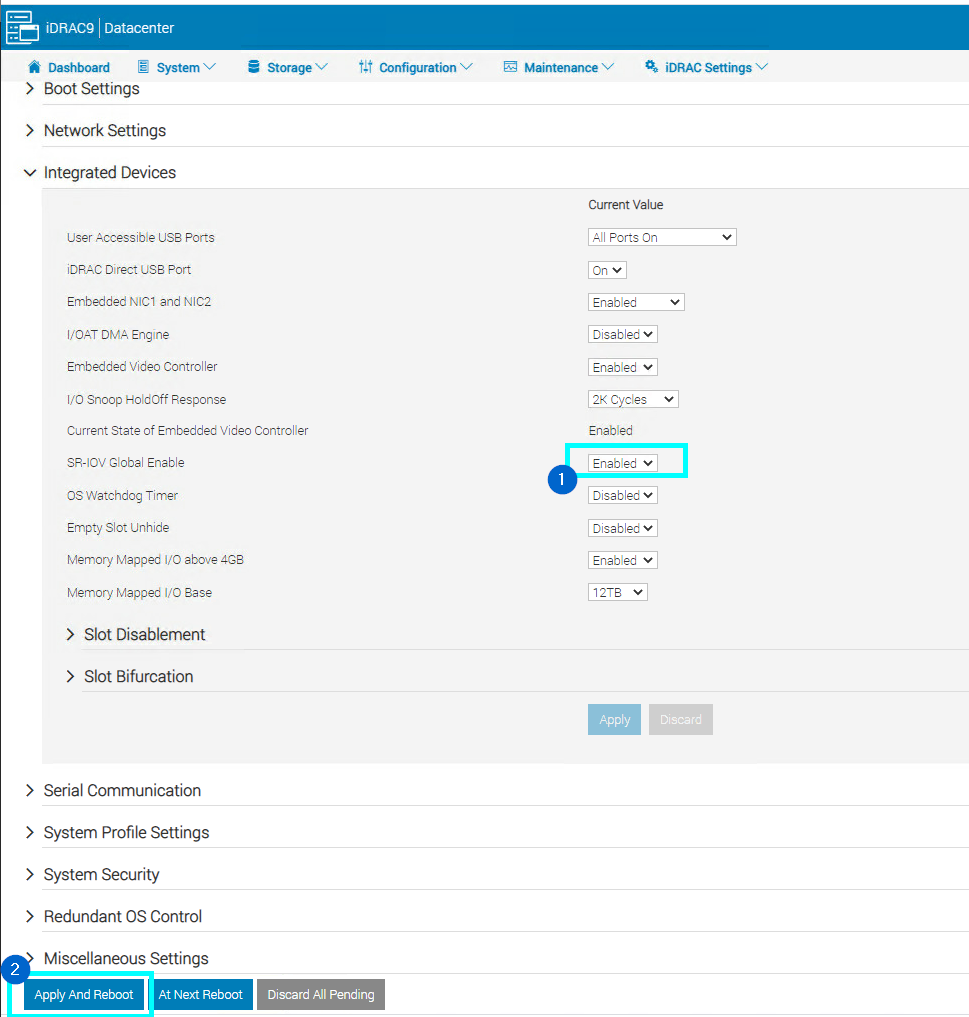 A GPU card can be configured in one of two modes: vSGA (shared virtual graphics) and vGPU. The NVIDIA card should be configured with vGPU mode. This is specifically for use of the GPU in compute workloads, such as in machine learning or high-performance computing applications. 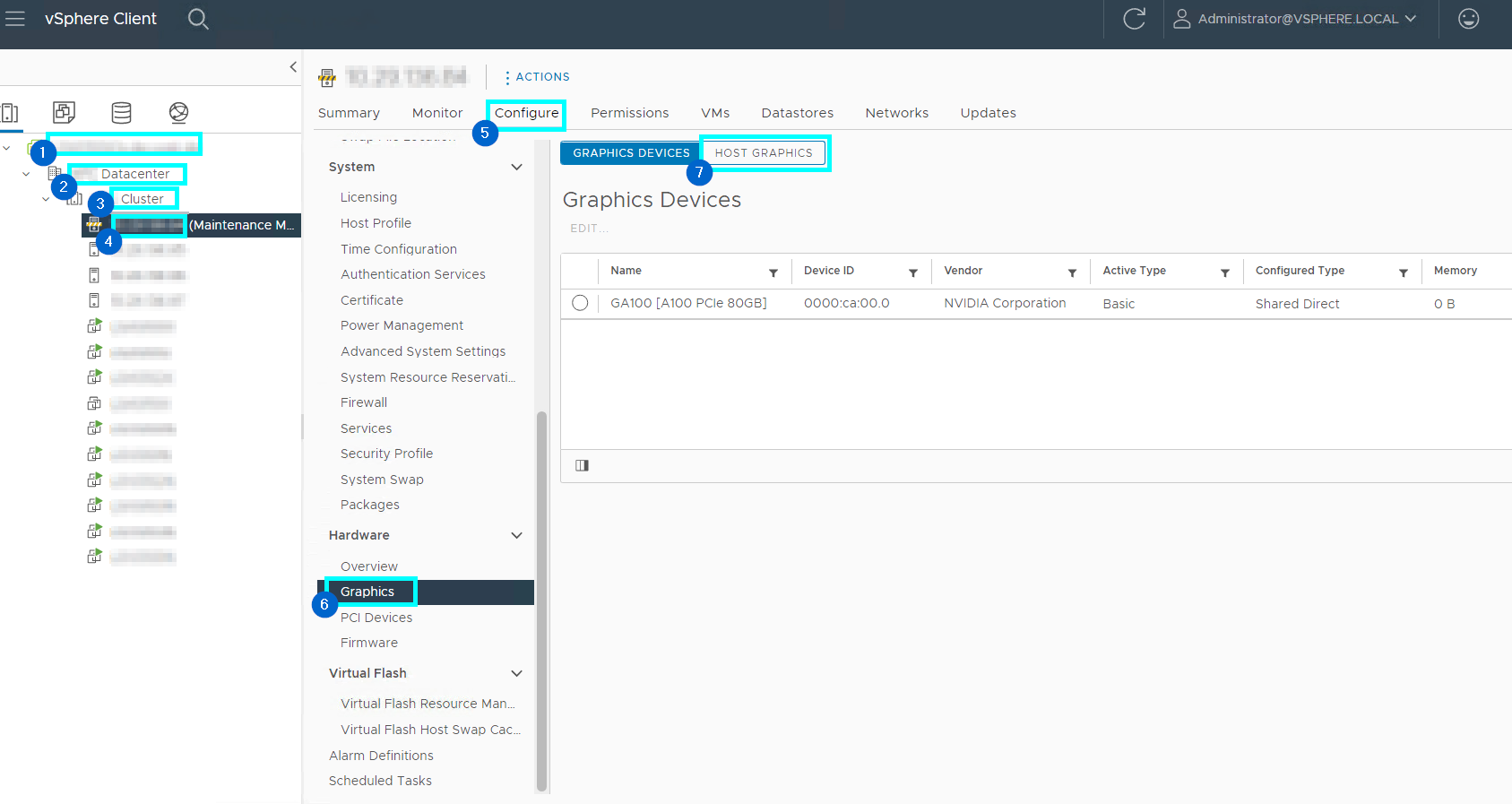 2. Under the Host Graphics click Edit and choose Shared Direct and Spread VMs across GPUs. Reboot the host after you changed the settings. 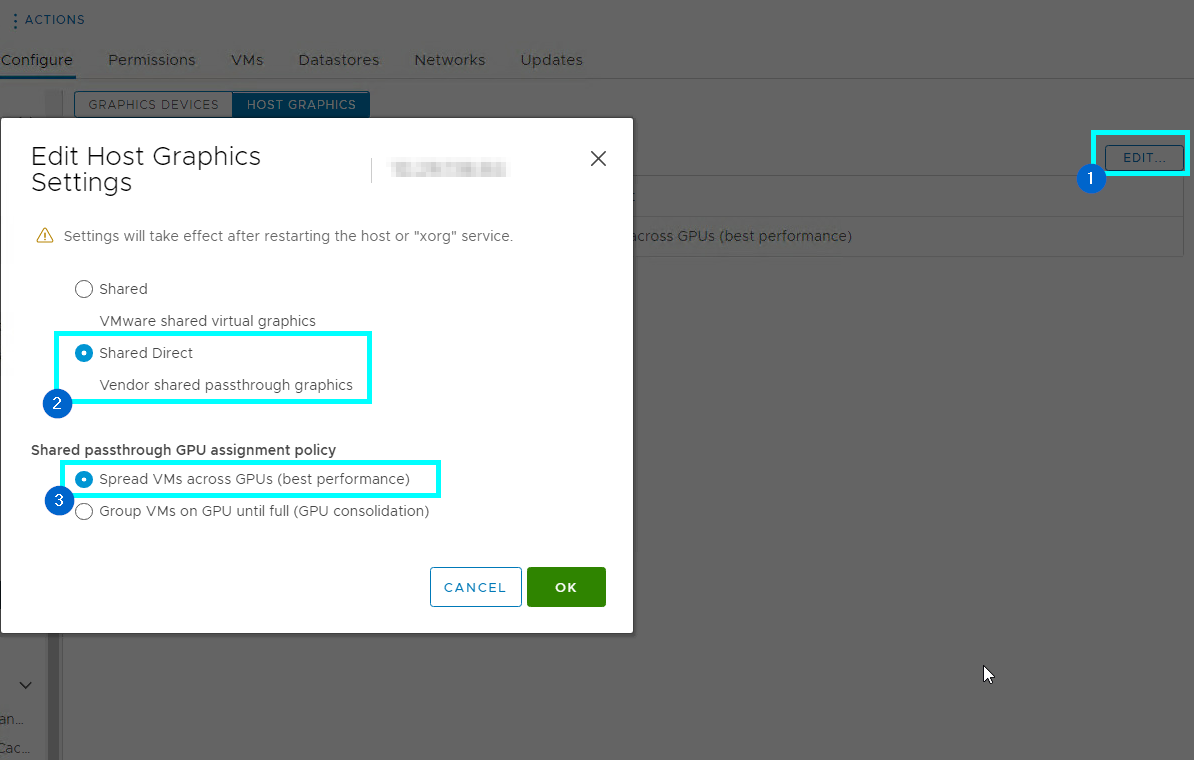 or access the ESXi host server either using the ESXi shell or through SSH and execute the following command:

3. Check the settings. The settings should appear as: 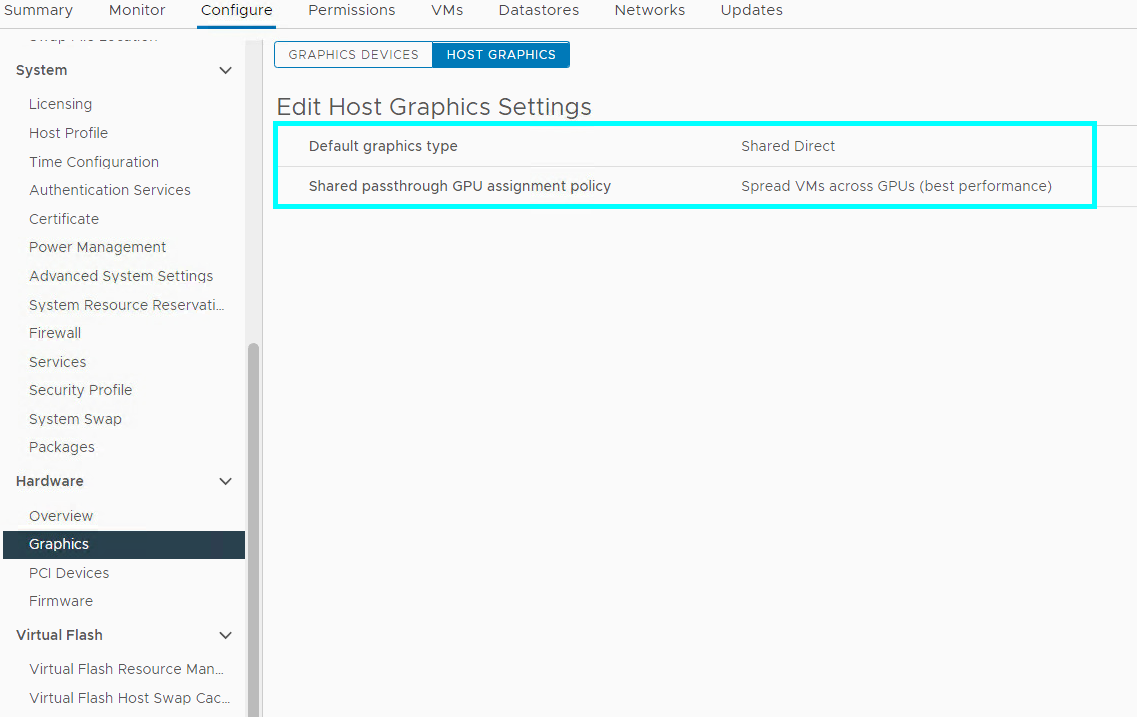 or check that the settings have taken using the command line by typing the following command:

This command should produce the output as follows: 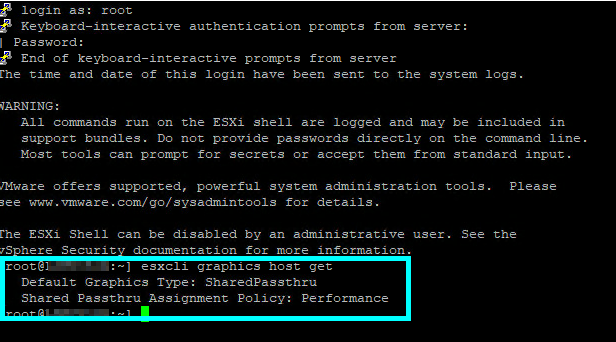 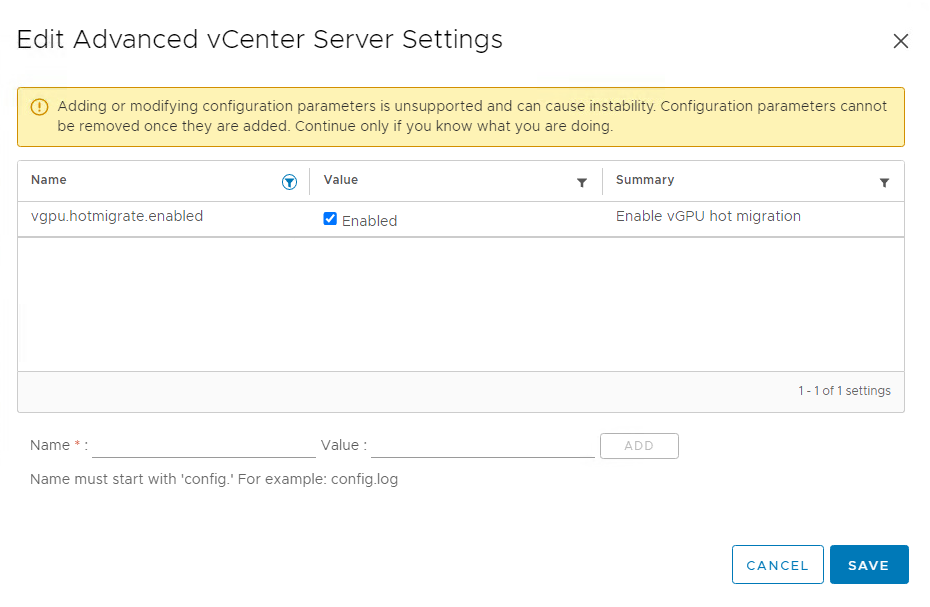 You can check if the setting successfully enabled is:

1. Upload the .VIB file to the ESXi datastore (Local or vSAN) using WinSCP or scp command. You can also upload it to the Content Library you previously configured:

2. Before proceeding with the vGPU Manager installation, make sure that all VMs are either powered off, moved away, or quiesced and place the ESXi host in Maintenance Mode.

you can place the host into Maintenance mode using the command prompt by entering:

This command will not return a response.

3. After placing the host into maintenance mode, use the following command to check if different NVIDIA VIB already installed is:

4. If older or GRID VIB is installed, it has to be removed with following command:

6. Reboot the ESXi host from the vSphere Web Client by right-clicking the host and selecting Reboot or reboot the host by entering the following at the command prompt:

This command will not return a response. If you use a command there is no need to enter a descriptive reason for the reboot in the Log a reason for this reboot operation field

7. Access the ESXi host via the ESXi Shell or SSH again and install the package with the following command:

in my case VIB resides on a vSAN datastore within Content Library folder:

8. Reboot the ESXi host again. Although the display states “Reboot Required: false,” a reboot is necessary for the vib to load and Xorg to start.

9. Previously was our GPU presented under the Host Graphics  with Memory 0 B

and now it says Memory 80 GB

10. After the ESXi host has rebooted, verify the installation of the NVIDIA vGPU software package. First, check the installed VIB with the following command:

If the NVIDIA driver is not listed in the output, check dmesg for any load-time errors reported by the driver.

12. Verify that the NVIDIA kernel driver can successfully communicate with the NVIDIA physical GPUs in your system by running the nvidia-smi command. 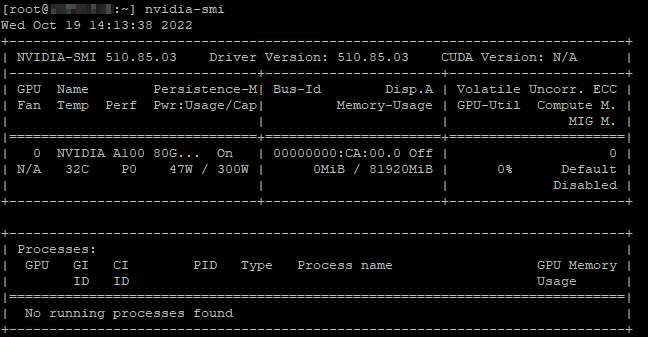 Running the nvidia-smi command should produce a listing of the GPUs in your platform.

When choosing the type of vGPU support you will allow a VM to have, you use the NVIDIA GRID vGPU Profile choices in the vSphere Client. Here is that view of the set of vGPU profiles available on an A100-equipped host for the time-sliced vGPU drivers. The number before the final “c” in the NVIDIA vGPU profile name is the number of GB of frame buffer memory (i.e. memory on the GPU itself) that this profile will assign to a VM. Here, we are choosing to have 4 GB assigned to our VM. 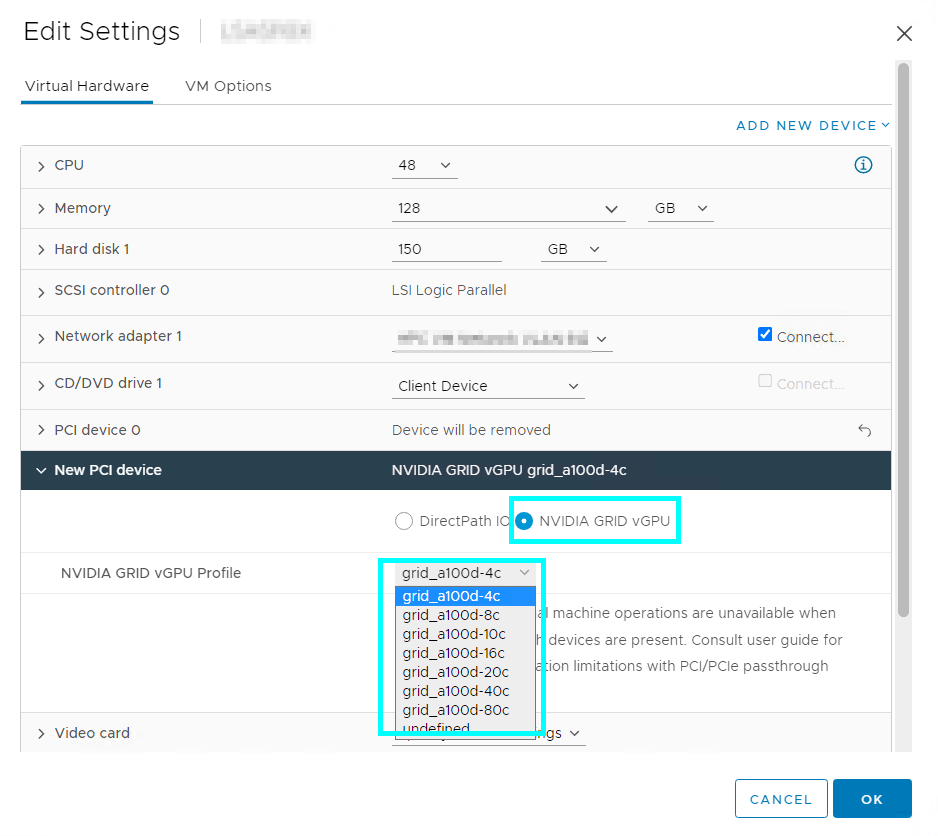 The traditional time-sliced NVIDIA vGPU mode  does not provide strict hardware-level isolation between VMs that share a GPU. It schedules jobs onto collections of cores called streaming multiprocessors (SMs) according to user-accessible algorithms such as fair-share, equal share or best effort. All cores on the GPU are subject to being used in time-sliced NVIDIA vGPU, as well as all the hardware pathways through the cache and cross-bars to the GPU’s frame buffer memory.

1. To enable MIG on a particular GPU on the ESXi host server, issue the following command:

where -i refers to the physical GPU ID, since there may be more than one physical GPU on a machine. If no GPU ID is specified, then MIG mode is applied to all the GPUs on the system.

2. Continue with a second command as follows:

That second command resets the GPU only if there are no processes running that currently use the GPU. If an error message appears from the nvidia-smi –gpu-reset command indicating that there are running processes using the GPU, then just reboot the server. Try to check with any owners of running processes or VMs first before doing that.

3. After the reboot, when the host is back up to maintenance mode, issue the command:

and you should see that MIG is now enabled: 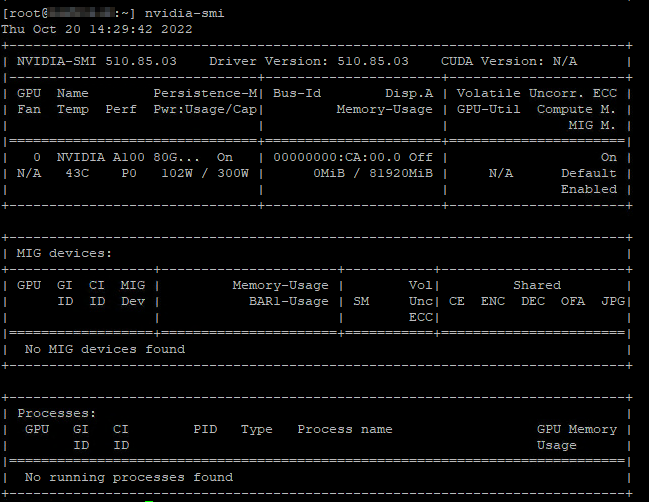 4. To check the set of allowed GPU instance profiles, use the following command

At this point, there are no GPU Instances created, so “Instances Free” is zero for each profile. 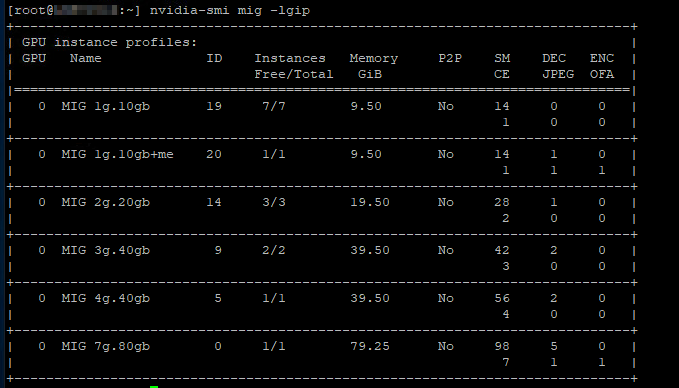 in my case, I chose GPU ID zero (-i) on which I created a GPU Instance using profile ID 4 (the MIG 2g.20gb). This GPU instance occupies 20 Gb of frame-buffer memory.

Notice that the Compute Instance profiles shown are compatible with the GPU Instances that we created – they have the same “2g.20gb” in their names.

8. Now we pick an existing GPU Instance with ID=1, and create the Compute Instance on it

9. You can see the new Compute instance:

10. Now assign the vGPU profile to the VM within the vSphere Client. That vGPU profile choice associates the GPU Instance we created with the VM – and enables it to use that particular slice of the GPU hardware. In “Edit Settings” choose “Add New Device”, choose the NVIDIA GRID vGPU PCI device type and pick the profile. In our example, because we created our GPU Instances with the “MIG 2g.20gb” profile, then the applicable vGPU profile for the VM from the list above is the “grid_a100-2-20c” one, as that has a direct mapping to the GPU Instance type. Following this vGPU profile assignment, the association between the GPU Instance and an SR-IOV Virtual Function (VF) occurs at the VM guest OS boot time, when the vGPU is also started. 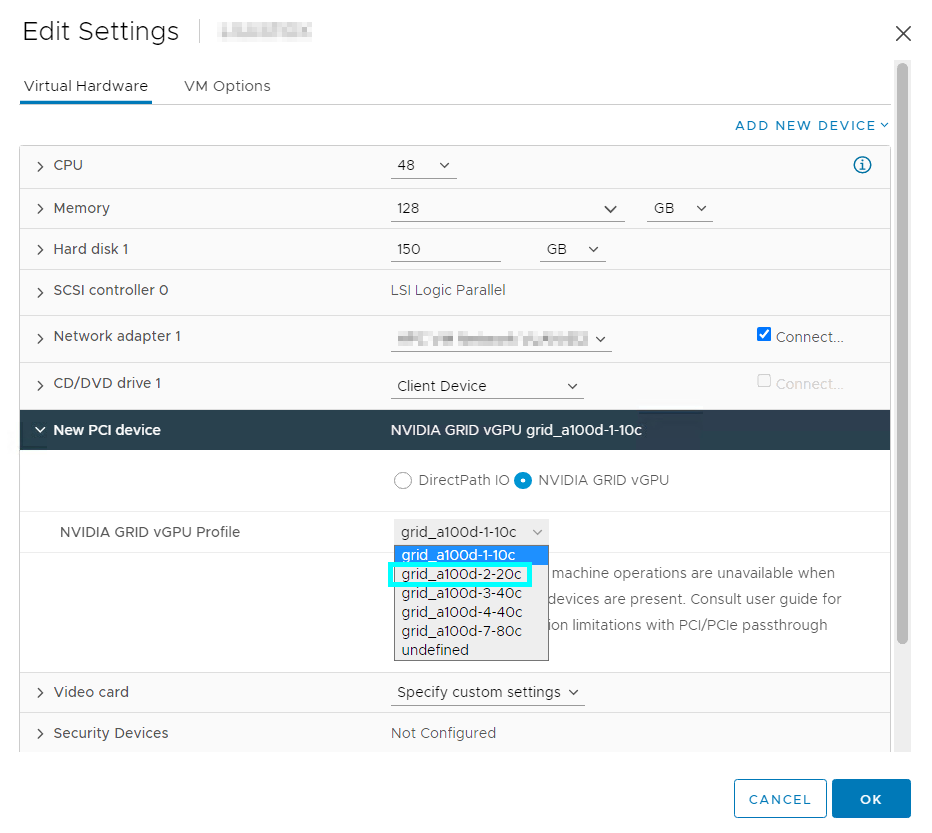 1. First remove any compute instances with the following command:

if you try to delete a GPU instance without first deleting the compute instances you will get error message:

3. To disable MIG on the GPU 0 use the following command.

4. After the reboot, when the host is back up to maintenance mode, issue the command:

and you should see that MIG is now disabled: 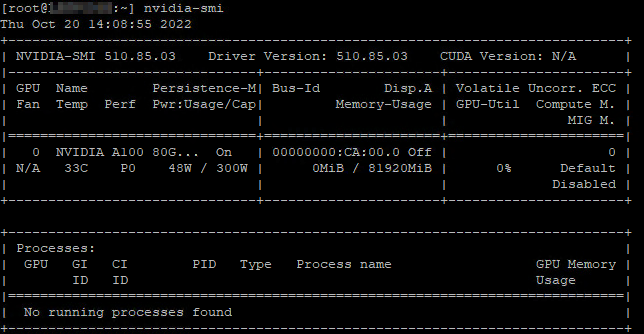 After configuring everything correctly you can choose the vGPU Profile for the Virtual Machine,  install the vGPU driver for the VM guest operating system and apply the license.